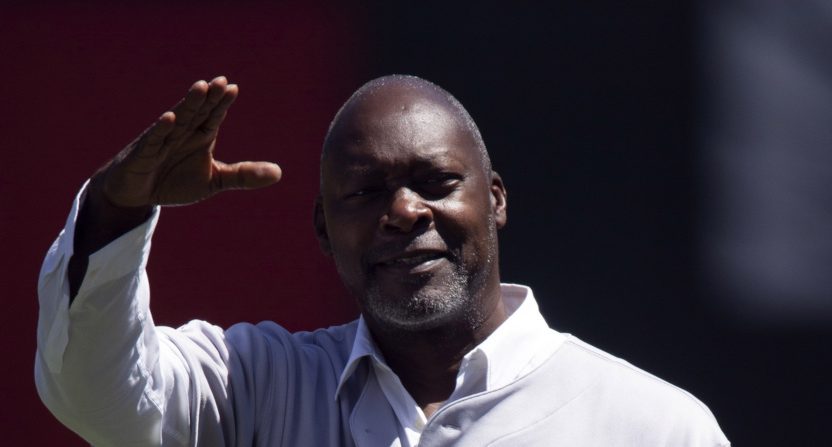 Last week saw reports Tuesday of Pasadena police investigating Los Angeles Dodgers pitcher Trevor Bauer for assault, and The Athletic reporting the extremely graphic details of the physical and sexual assault allegations against him Wednesday. Bauer’s co-agent Jon Fetterolf disputed those allegations in a statement Wednesday (which can be read in full here) and said Bauer would contest that restraining order at a July 23 hearing, and the Dodgers themselves opted to not take action against Bauer, with manager Dave Roberts saying Thursday they would leave that to the league and planned to start Bauer as normal Sunday. Well, MLB did intervene to place Bauer on seven-day administrative leave Friday while they conducted their own investigation, but the Dodgers’ inaction has still created blowback. The latest is from former Dodgers’ star Dave Stewart (seen above at a 2019 Oakland A’s event), who told Bob Nightengale of USA Today that he’s withdrawn from plans to attend the team’s July 25th celebration of the 20th year since their 1981 World Series victory:

“The organization isn’t what it was when we came through,’’ Stewart, a rookie relief pitcher on the 1981 World Series team, told USA TODAY Sports. “The Dodgers organization that I grew up in under the O’Malley family would never stand for that. The Dodgers should have stepped up in that situation, and they didn’t. You’ve got to have character standards.

When Stewart informed the Dodgers he won’t be attending the July 25 celebration, he said he received an e-mail that read: “The team and the Players Associations support the player until he’s guilty.’’

Stewart said he responded in all caps: “HE BROKE THE UNWRITTEN RULE ON HOW YOU SHOULD TREAT WOMEN!”

…“The Dodgers let MLB enforce the leave of absence,’’ Stewart said, “but in my opinion, you don’t need to wait for MLB to tell you what to do. Why are you putting your hands on a woman that way? He tries to say it was consensual, but what kind of person would ever do that?”

I really appreciate this, but it definitely wasn’t for likes…it’s for what’s right. None of us are powerless in this.

As Nightengale points out, teams don’t have to wait for MLB rulings to take action of their own. One recent example comes from the Cleveland Indians, who put pitchers Mike Clevinger and Zach Plesac on the restricted list for a while last August after they violated team COVID-19 protocols.

Yes, the Bauer situation is obviously different, involving a police investigation rather than just team rules. But if anything, that’s perhaps even a better argument to proactively remove Bauer from the lineup pending investigation rather than waiting for MLB to weigh in. And their decision not to do so has now led to one prominent former player removing himself from a planned event.