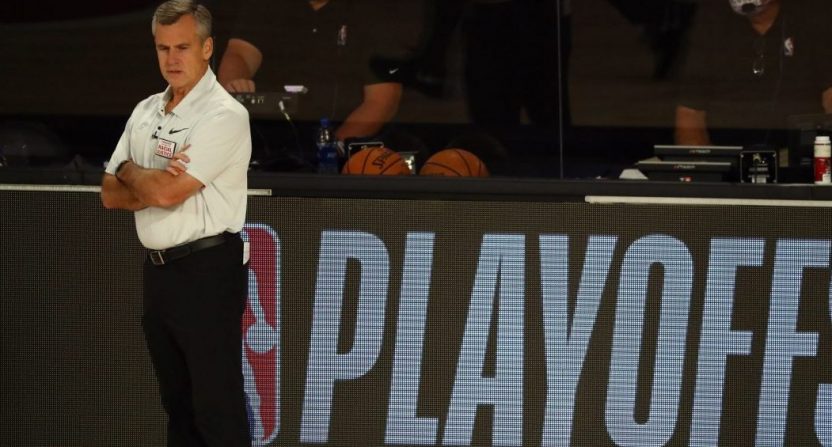 It turns out that Billy Donovan wasn’t out of the NBA for too long. Exactly two weeks ago after the Oklahoma City Thunder lost to the Houston Rockets in Game 7 of their NBA first-round playoff series, Donovan (seen above coaching Game 1 against Houston in August) and the Thunder “mutually agreed to part ways.” Now, Donovan has surfaced with the Chicago Bulls, as per ESPN’s Adrian Wojnarowski:

Billy Donovan has agreed to a deal to become the next coach of the Chicago Bulls, sources tell ESPN.

Chicago Bulls executive VP of Basketball Operations Arturas Karnisovas aggressively pursued Donovan in the aftermath of Donovan’s leaving the Oklahoma City Thunder after five seasons, sources said, selling Donovan on a partnership and vision for a talented young roster and chance to lead one of the league’s anchor franchises.

This would seem to provide some coaching stability to a Bulls’ team that could use it. After the team fired Tom Thiboudeau after an Eastern Conference semifinals loss in 2015 (despite making the playoffs every year in his five-year tenure there), they brought in Fred Hoiberg from Iowa State, but went 115-155 in three and a half regular seasons under him (with one playoff appearance, an eighth seed and a first-round loss in 2017). They fired Hoiberg after a 5-19 start in 2018, replacing him with assistant Jim Boylen, but Boylen went 39-84 over two seasons, was rightly mocked for several reasons, and was eventually fired this August.

But the Bulls have made several changes to their overall approach recently, particularly in April’s moves to part ways with long–criticized executive Gar Forman, reassigning John Paxson to an advisory role, and putting Karnisovas in charge of basketball operations. And now, they’ve landed an experienced NBA head coach, and one who did very well in Oklahoma City. Donovan posted a 243-157 regular-season mark there over five years, making the playoffs each year, and while four of those playoff trips ended in the first round, he led the Thunder to the Western Conference finals in 2015-16. And Oklahoma City posted a 44-28 record under him this year, second in the Western Conference, and he and Milwaukee’s Mike Budenholzer were named co-coaches of the year (in an award voted on by NBA coaches).

We’ll see how Donovan does in Chicago, and quick success there definitely isn’t certain given the limited talent already on that roster. But Donovan is one of the few recent coaches (Boston’s Brad Stevens is another) to make the jump from the NCAA to the NBA very well; others, like John Beilein, haven’t pulled off that transition as smoothly. And Donovan showed off an impressive ability to work with a frequently-changing roster in Oklahoma City. It will be interesting to see how this turns out for the Bulls, but it’s certainly a hire that seems to make a lot more sense than when they promoted Boylen.