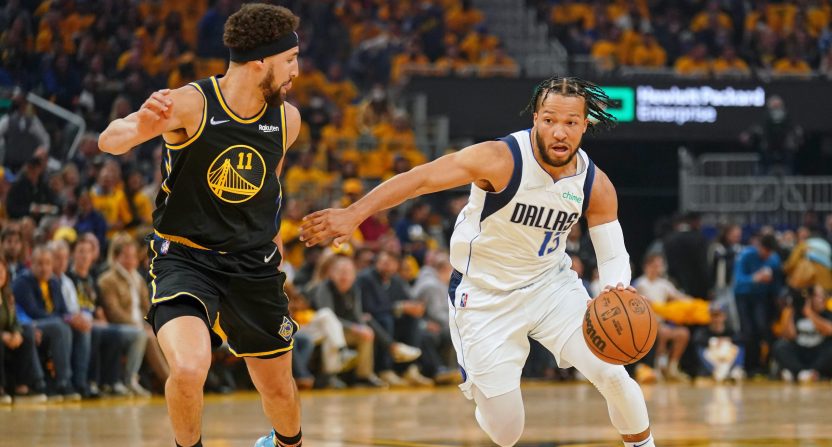 The New York Knicks missed out on Dejounte Murray but it appears that they made sure not to miss on Jalen Brunson.

According to ESPN, the Dallas Mavericks have been informed that Brunson intends to sign with the Knicks in free agency.

Per Shams, the point guard will sign a four-year deal worth almost $110 million. He’s also reporting that the Mavericks did not get a chance to make a counteroffer.

Brunson was supposed to meet with the Mavs after the free agency period begins on Thursday evening but it was canceled. The news isn’t a major surprise as the Knicks have been positioning themselves to land the young star for weeks now. Knicks president Leon Rose, who made a series of trades to ensure that the team had the cap room available, had previously represented Brunson and his father as an agent. His father, Rick Brunson, was also recently hired as an assistant coach.

Jalen is coming off a career-best season during his four years with Dallas, having averaged 16.3 points, 4.8 assists, and 3.9 rebounds per game in 79 appearances. The 25-year-old, who won two national titles with Villanova, is expected to be a central part of the Knicks’ seemingly never-ending rebuild next season.

While we wait for the signing to become official, there were a lot of reactions to the news around the NBA world, with some loving the move for New York and others wondering how tampering wasn’t involved.

Let the record show that I absolutely love this for the Knicks. https://t.co/tKc4qHStbB

And for the record…this has to be one of the most clear-cut tampering cases in NBA history.

The Knicks haven’t even tried to hide it. Question is, will the NBA do anything about it? I doubt it, for some reason…it’s the Knicks after all. https://t.co/XxEI7DkaQp

It's a good thing the NBA would never ever tolerate tampering, or else I'd think it suspicious that this deal is set before free agency's even started https://t.co/mfyE6YKk9n

Any Knicks fan that thought this was a lock and isn’t relieved, hasn’t been a fan long enough or is lying https://t.co/omclbN3V9C

bout to be the best basketball player in new york by february https://t.co/CAfPcSOnzr