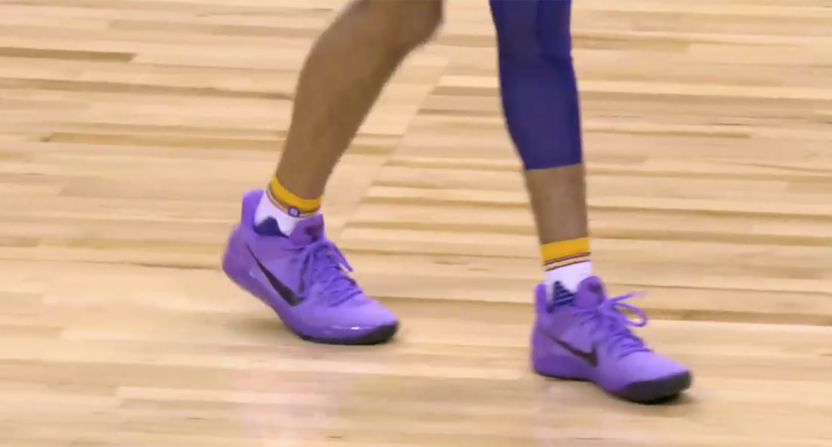 Lonzo Ball did not have the best start to NBA Summer League play. Even with a triple-double in his second game, he was averaging 8 points, 8 assists and 7.5 rebounds while shooting 25 percent from the field and 12.5 percent from three.

Athletes have all sorts of quirks to break out of slumps, but Ball made a change for Wednesday’s game that no one saw coming. He ditched his signature Big Baller Brand shoes for some the Nike Kobe A.D.

We’ll see how LaVar Ball, Lonzo’s crazy, polarizing sports dad who was so proud of those ugly, signature ZO2s, reacts to this move. Everyone made fun of those ZO2s, even Warriors coach Mike Brown and WNBA stud Elena Delle Donne. And almost nobody was buying them.

Who knows if it has anything to do with the shoes, but Lonzo is putting together his best performance as a Laker so far. Through three quarters, he had 21 points (on six for 14 shooting), nine assists, six rebounds and five turnovers. One of those dimes was this full-court beauty to Kyle Kuzma.

Those shoes appear to be doing the job, and they cost $335 less than the ZO2’s! However, shoes aren’t infalliable, as this three-point attempt that found nothing but air shows:

Lonzo was feeling some type of way and launched a three from Curry range, but airballed it pic.twitter.com/hJqUoA0QQK