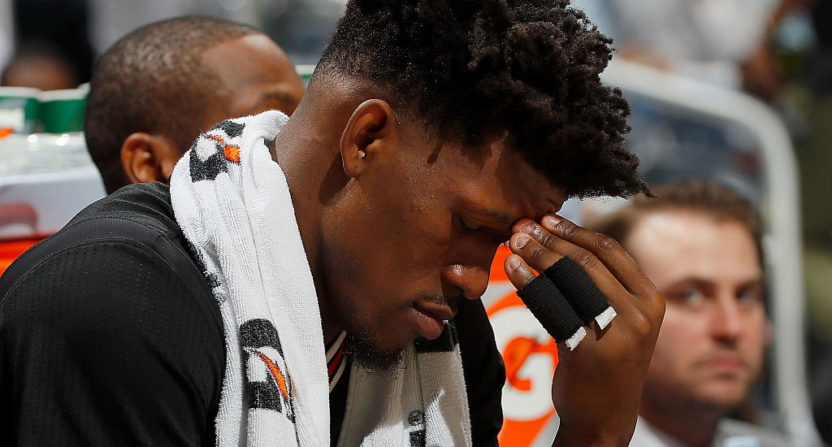 This year’s NBA offseason has been one of significant change, especially for teams long resisting a rebuild. None of them were catching the Golden State Warriors and Cleveland Cavaliers right now. So might as well try to hit reset today and hope that you’re back to contention as both squads are on the decline.

The 2017 NBA offseason is far from over, but the NBA Draft and early free agency period have both wrapped up already, providing us with ample opportunities to assess which franchises have declined the most compared to last season.

Bulls fans understood that Jimmy Butler could get traded, but were not thrilled with the menial deal they ended up getting for the All-Star. Bringing over Zach LaVine and Kris Dunn from the Minnesota Timberwolves will not hasten a rebuild or make the team bad enough to upgrade its lottery station for next season. The eventual seventh pick in the draft, Lauri Markkanen, was no sure thing and also fails to impact the team right at this second. Butler was the best thing Chicago had going for it, and yet there was little fetched in return. It’s a puzzling move for a franchise mired in head-scratching decisions in recent years.

Despite a four-game sweep at the hands of the Cavaliers in round one this year, the Pacers looked like a team that could at least test Cleveland. But in facing what they were this offseason, Indiana forgot the most important part of trading Paul George was getting something valuable in return. Domantas Sabonis and Victor Oladipo are fine, but neither is going to make up for the loss of George or help the team be worse in the short-term (see Chicago’s similar issue above). Indiana didn’t even grab a pick for George — something that Chicago admittedly did, even if it was just a swap for a small upgrade. Considering what the Celtics appeared willing to deal, this makes Indy all the worse off.

Just a couple years removed from a 60-win campaign, Atlanta’s stripped the thing down to the studs, basically. This offseason, the work dismantling the team was completed. They flipped Dwight Howard to division rival Charlotte for Marco Belinelli, Miles Plumlee and a round two draft downgrade. Atlanta also parted ways with Paul Millsap, shipping him off to Denver in a three-team trade with the Clippers. In return, the Hawks received Diamond Stone, the Clippers’ 2018 first-round pick and cash. None of these pieces coming back sound like anything worth watching in the short term. It’s a stunning turn after the hire of Mike Budenholzer brought so much excitement a short time ago.

Memphis can still potentially fit the mold of a playoff team, but nonetheless, the losses of Zach Randolph and Vince Carter won’t do them any favors there. While Carter’s been in the league forever (literally, it’s been 19 years now), his ability to score a bit and rebound off the bench makes him a valuable veteran at the minimum salary. Randolph, on the other hand, has been a figurehead of the “Grit and Grind” era of Grizzlies hoops. Even at a lower production level than he may have once had, Randolph still managed 14 points and eight boards in 2016-17. Additions like Tyreke Evans and Ben McLemore aren’t just going to replace all of that.

Losing Gordon Hayward was expected as a potential outcome of this offseason, so while his move to Boston is not jarring, it nonetheless harpoons what the Jazz were building over the last few years. George Hill departing for the Sacramento Kings stings even further, even as the team re-signs Joe Ingles and trades for Ricky Rubio at point guard. Utah was a very good team last year, despite injuries that sidelined key pieces for extended stretches (and even in the playoffs). Rudy Gobert and co. could still potentially make the postseason, but the promise presented by last year’s run is over.

(A special postscript is also due for your author’s beloved New York Knicks, whose offseason will likely be defined by what they can get back in any Carmelo Anthony deal — hence the reason they were not included on this list)