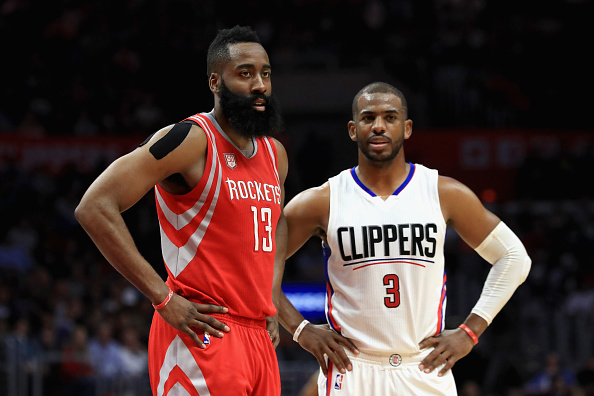 A wild NBA offseason has already created some major shifts in the league landscape. Perhaps not at the top, where the Golden State Warriors and Cleveland Cavaliers remain perched. But elsewhere, teams fighting to compete with those two franchises have made countless moves to improve.

While the offseason is far from over, the NBA Draft and early free agency period are both complete, which provides fans a reasonable vantage point to evaluate whether or not certain teams have truly taken this time to improve their respective rosters for next season.

Looking over the countless roster changes, here are five teams that have improved more than the rest:

The biggest move of the offseason wasn’t even made through free agency. Right before July began, Houston made a deal for Los Angeles Clippers point guard Chris Paul to pair with James Harden, one of the league’s top scorers. The Rockets gave up little in the big scheme in order to acquire him, and now appear closer to the top of the West (Golden State, San Antonio) than they were previously.

Houston’s growing war chest also makes them a potential destination for the New York Knicks’ Carmelo Anthony, who feels confident he’ll be moving to Texas very soon. Acquiring ‘Melo wouldn’t mean Houston’s better than the Warriors’ collection of stars. But it would be the league’s most stunning collection of shooters outside of Oakland.

For years, we’ve waited patiently for the Timberwolves and their stockpile of young talent to take off, and now it appears they finally have. Minnesota traded for the Chicago Bulls’ Jimmy Butler on draft day, immediately vaulting them into the playoff conversation for the first time in over a decade. Not content with simply upgrading there, the T-Wolves also added Jeff Teague and Taj Gibson.

Minnesota may still have some questions around who handles the scoring load, given the collection of defensively-minded players. But with a sudden influx of exciting players on the roster, it’s now much easier to lure a veteran wing.

Gordan Hayward is now a Celtic, to the tune of four years and $128 million (with a player option for year four). That automatically upgrades Boston on both ends of the floor, and makes them a far more dynamic opponent for Cleveland — and no other Eastern team, because none of them are really close to those two now. Losing Avery Bradley via trade to Detroit hurts the Celtics’ defense a bit. But the hope is that Hayward helps mitigate that trade-off.

Where Boston could see this offseason reevaluated is if it ends up dealing other players like Marcus Smart or Jae Crowder to make room for title contention at the risk of depth.

It didn’t appear that OKC would be a major player in the market this summer, and instead, the Thunder made one of the biggest splashes of all. In acquiring Paul George (who could end up being a rental), they surrendered Victor Oladipo and Domantas Sabonis to the Indiana Pacers. Considering what Indy appeared to be demanding for the All-Star, that’s about as good as one could expect. George and Russell Westbrook should make for an exciting pair on the offensive now, and perhaps a Western Conference playoff run could encourage the California native to stick around Oklahoma instead of heading to the Lakers next year. Because of what they gave up (not much), however, this was a risk worth taking for the Thunder.

The savvy move to acquire this year’s No. 1 pick Markelle Fultz appeared to set the Sixers on a course to make the postseason by way of #TheProcess. And that was before the team signed the highly accurate (over 41 percent career shooting from three) J.J. Redick. Obviously the young and exciting core is what makes Philadelphia a rising squad in the floundering East. But Redick’s veteran presence and expert marksmanship could be exactly what it needs to gel into a playoff team.