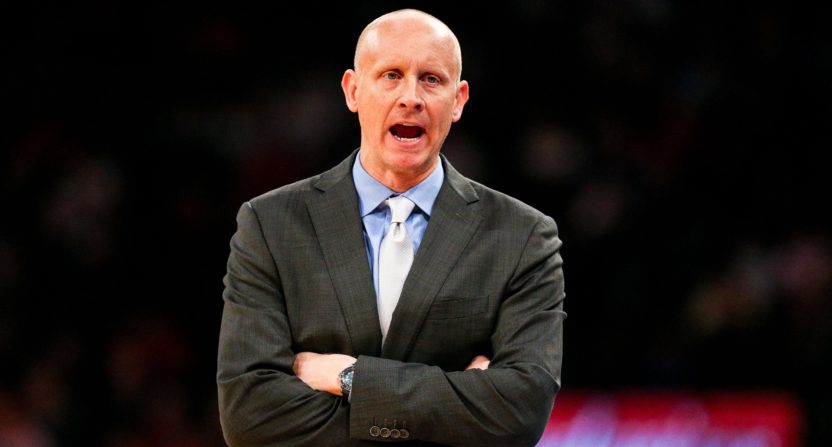 The Louisville Cardinals came into the 2017-2018 college basketball season hoping to add to their legendary head coaches impressive legacy. They will enter the 2018-2019 season hoping that their new coach can make you forget all about that guy.

Tuesday, Louisville announced that they had agreed to a seven-year deal with former Xavier coach Chris Mack to be the one who will lead their men’s basketball program out of purgatory and back into the big leagues.

Mack spent nine very successful seasons as the head coach at his alma mater. They include eight 2o-win seasons, three conference titles, and eight NCAA Tournament bids. This past season was a culmination of Mack’s accomplishments as he led the Musketeers to the school’s first No. 1 seed, though they lost to nine-seed Florida State in the second round.  As The Comeback’s Michael Grant noted earlier this week, the time seemed right for Mack to take things to the next level.

If Mack has dreams of winning a national championship, now appears to be the right time to leave Xavier. His stock may never be higher. Mack, 48, has been with the Musketeers for eight seasons. He has helped transition the program from the Atlantic 10 to the Big East. Mack has continued the successes his predecessors established at the program.

Mirroring Xavier’s great 2017-2018 season is Louisville’s, which was, by all accounts, a disaster. Rick Pitino’s 16-year reign atop the program came to an unceremonious end when he and athletic director Tom Jurich were cited in an FBI investigation into paid players and shady dealings, the kind of thing that had some people thinking “death penalty” for a short while. Former assistant and ex-Louisville player David Padgett was promoted to acting head coach in what was the most bizarre season in school history. Following an investigation into a separate issue, dubbed StripperGate, it was announced that the school would vacate its 2013 National Championship, amongst other victories. In spite of all the off-court drama, the team ended the season 22-14 in the NIT, a far cry from their preseason expectations. Further sanctions and Justice Department findings could still be ahead.

Let’s not even get into all the Papa John stuff.

All of which is why the school is going to want to put all their focus, and your focus, on Chris Mack. The 48-year-old is leaving his alma mater and his home city to take on the challenge of rebuilding Louisville to its ongoing status as a top-ten program. Not only did he find on-court success at Xavier but he also did so while keeping his nose relatively clean. Aside from a tendency to get into it with rival Mick Cronin (which, to be fair, seems easy to do) and some questions surrounding the departure of Myles Davis, Mack kept the focus on the basketball court where Xavier excelled.

It’s that kind of laser focus that Louisville would love to get back to having as well.

Certainly, that’s not entirely within their control. Pitino is apparently trying to get another job, which could cause some serious PR headaches for the Cardinals. Meanwhile, we haven’t heard the last of the FBI investigation into the sport and how Louisville might be involved beyond what we know.

Today serves as a reminder that if you're going to pay recruits and get caught up in a massive sex scandal, you better be part of the Power 5 and have unlimited money

In the meantime, however, expect Louisville fans to welcome Mack with open arms. He represents a winning mentality and an ability to maintain success over a long period of time. He’s not afraid to get down in the muck with rivals and seems like a genuinely good Xs and Os coach. Most of all, however, Chris Mack doesn’t bring very much baggage with him. For a school with so much baggage these days that it’s hard to see past it, that’s a welcome sight. If Mack can come through and get the Cardinals back to where they were just two years ago, then it’s unlikely you’ll hear very many people in Louisville talking about Rick Pitino anymore.

Their hope is that you’ll feel the same way.