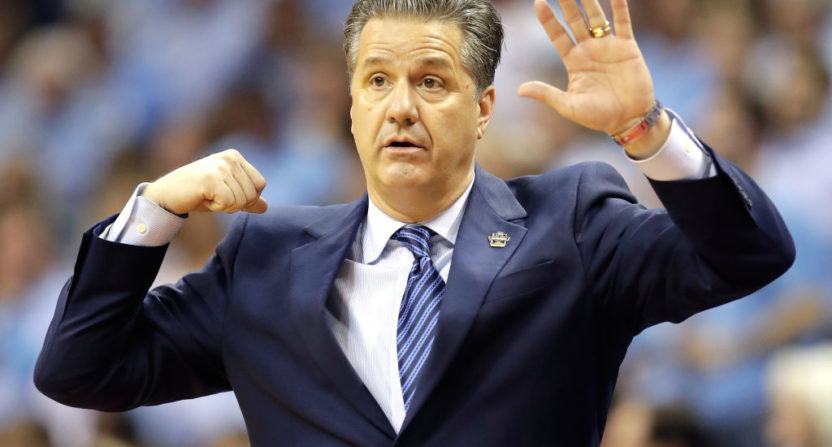 In the John Calipari era, it’s unusual for the SEC to be anything more than Kentucky, a sizable gap, and then a bunch of teams just trying to make the NCAA Tournament. (Yes, South Carolina made the Final Four last year, but we’re talking regular season.) Calipari’s Wildcats are still the favorite this year, but the top of the SEC is as deep as it’s been in at least five years.

With Florida challenging Kentucky’s string of three straight league titles, Alabama and Texas A&M shaping up like potential top 25 teams, and Missouri returning to national relevance, the SEC will provide plenty of entertainment over the next five months.

Missouri is relevant again for the first time in half a decade. Under new hire Cuonzo Martin, the Tigers put together a top-five recruiting class, per 247Sports, snagging five-star forwards Michael Porter Jr., Jontay Porter and Jeremiah Tilmon. You don’t want to take too much from exhibitions, but in this week’s meeting with Kansas (a top-five team), Michael Porter dropped 21 points while Jontay Porter recorded a game-high 12 rebounds. Tilmon added 10 points before fouling out.

While Kim Anderson didn’t do much well in his three years at Missouri — he left with a 27-68 record — he did leave Martin a pair of solid veterans in Kevin Puryear and Jordan Barnett. Those two, along with Canisius grad transfer Kassius Robertson, will keep this team from being completely freshman-dominant, and their experience will be a key in pushing this program back to the NCAA Tournament.

As good as Missouri’s class is, John Calipari unsurprisingly outdid the Tigers, reeling in six five-stars. Between those newcomers and redshirt freshman Hamidou Diallo, who nearly left for the draft in the spring despite never playing a collegiate game, makes the Wildcats conference favorites and national title contenders once again.

Between Diallo, forward Kevin Knox, center Nick Richards and forward Jarred Vanderbilt, Kentucky should have at least four first-round picks in the 2018 draft. However, Vanderbilt is nursing a foot injury and could still face surgery. Initially, Calipari said Vanderbilt wouldn’t be back until SEC play at the earliest. Now he’s optimistic he could return sooner than that. This Kentucky team is undeniably worse without Vanderbilt, but they have the frontcourt depth to win the SEC without him.

Avery Johnson got exactly the guy he needed to take his rebuild at Alabama to the next level. The Crimson Tide quietly put together an impressive 2016-17 campaign, winning 19 games — including 10-8 in the SEC with a conference semifinal appearance — and finishing with the nation’s 10th most efficient defense, per KenPom.

In addition to returning their top three scorers, the Crimson Tide add five-star point guard Collin Sexton, four-star shooting guard John Petty, and Ohio State transfer Daniel Giddens. With all the hype surrounding Missouri’s and Kentucky’s freshmen, it’s easy to lose track of Sexton. But he’ll be one of the SEC’s best players from day one.

Alabama hasn’t reached the NCAA Tournament since 2012, and it hasn’t worn its home jerseys in the first round since 2005. Those streaks should end this March.

If you’re looking for a sleeper in the SEC, look no further than Texas A&M. The Aggies entered the 2016-17 season as a possible Top 25 team but didn’t even make the NIT with a 16-15 record. Injuries played a role — versatile forward DJ Hogg missed nine games — but even with a healthy lineup the Aggies went 1-8 against teams in the KenPom top 60.

This squad is fortunate to get a reboot in 2017-18 with the help of an extra year of experience. They return their top five scorers and welcome Marquette transfer Duane Wilson, an upgrade over JC Hampton and a key addition to a thin backcourt. Redshirt freshman JJ Caldwell — a top 15 point guard in last year’s class — should also carve out an important role.

While the backcourt is shaping up to be much better, Texas A&M’s strength still lies up front. They have a pair of NBA prospects in 6’10” towers Robert Williams and Tyler Davis, who have the talent to combine for 30 points, 20 rebounds and four blocks per game.

Time for South Carolina to rebuild

Frank Martin did the unthinkable by taking South Carolina to the Final Four, as a No. 7 seed nonetheless. The Gamecocks got bounced when their upset bid against Gonzaga fell just short. Between graduations and NBA draft declarations, they lost five key guys, including do-it-all guard Sindarius Thornwell. The starting frontcourt remains intact with Chris Silva and Malik Kotsar returning, but in the backcourt South Carolina will rely heavily on a pair of mid-major transfers: Kory Holden (Delaware) and Wesley Myers (Maine).

Martin once again proved his worth as a tactician in the NCAA Tournament, so it wouldn’t be the most shocking thing to see South Carolina sneak into the Big Dance once again. But this team will have to claw for its wins.

SEC Preseason Player of the Year