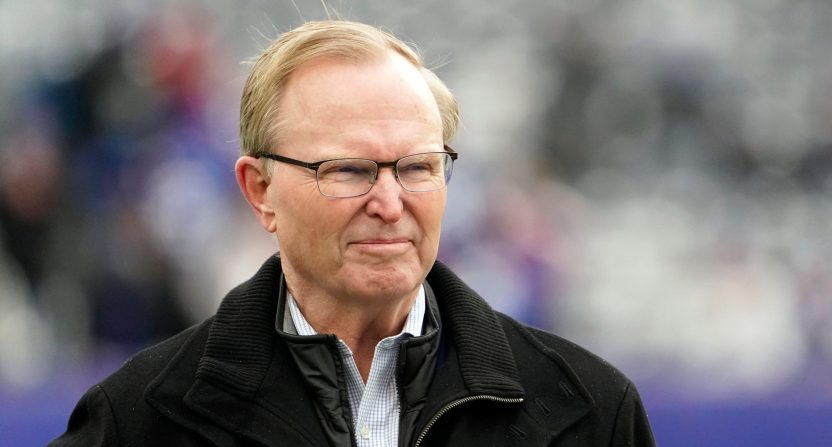 It has not been a good week for wealthy old-money families who run iconic NFL franchises, for once.

First, Chicago Bears chairman George McCaskey failed to inspire any confidence in the fanbase while also letting people know his mommy, the team’s owner, was very disappointed. Now comes John Mara, the co-owner of the New York Giants, who stepped behind the podium on Wednesday to discuss the team’s decision to fire head coach Joe Judge and how he thinks the once-proud franchise can return to glory.

In discussing why and how he and the rest of team ownership decided to fire Judge, Mara made it sound as if the decision was way harder than a lot of pundits would have thought or expected given the lack of results and strange decision-making Judge have been exhibiting.

John Mara says it was "gutwrenching" to tell Joe Judge that the Giants were making a change.

John Mara on if there was a last straw with Joe Judge:

Said he wasn’t thrilled with the 11-min press conference but there wasn’t one specific act that was the last straw. “It was a culmination of things.”

Said the Giants had dug a hole and he didn’t see a path out of it.

John Mara said this is the lowest moment in his ownership of the franchise.

"I kept thinking we hit rock bottom and then each week it got worse."

However, Mara said he remains convinced that Joe Judge can succeed as a head coach.

Mara: “I still think there is a good head coach inside Joe Judge.”

As far as why Giants fans should trust Mara to rebuild the franchise with a new GM and, eventually, fourth head coach in seven seasons? He’s actually not sure, to be honest.

Why should Giants fans trust John Mara will get things right this time? Said Mara: "Well, I haven’t given them any reason to believe that. It’s up to Steve and I to make the right choices going forward to earn back their trust. That is not going to be an overnight process."

Giants owner John Mara on why the fans should believe he can get it right this time:

“I haven’t given them any reason to believe that.” pic.twitter.com/jxRYIzUA3J

As far as the GM position goes, Mara thinks it’s a very desirable one in the NFL and that many people have expressed interest in it.

John Mara on the GM opening: "This is a very desirable job.”

Said so many people have expressed interest that they won’t be able to interview all of them. #Giants

John Mara on why he believes Giants GM job is a desirable one: "This is an organization people want to work for. I’ve been heartened so many people have expressed an interest, including people who have a lot of talent and have a legitimate shot at getting the job."

While many have assumed that Dave Gettleman’s retirement was done as a de fact firing, Mara refuted that claim, saying it wouldn’t have made sense to fire him at that time, despite the fact that multiple other NFL franchises fired their GMs this past week.

John Mara says firing Dave Gettleman before the season ended would not have been an advantage b/c the candidates he wanted to speak to weren't available until the end of the season anyway.

Like with most franchises in the NFL, nepotism has been a charge levied at the Giants as Chris Mara (John’s brother) and Tim McDonnell (John’s nephew) have very high-up positions in the personnel department. And given how poorly the Giants seem to have been run, and how bad the coaching hires have gone in recent years, many wonder if the Maras really should be handling all of these things for the franchise or should move out of the way to more qualified people.

John refuted any concerns, saying that they are creations of the media and that he has faith in them to make good decisions.

Mara said perception of nepotism has been created by external sources.

Yet the Giants have him in on the GM calls.

This, after just saying they need to earn the fans' trust back. https://t.co/yuD6bfUNH5

John Mara said that Chris Mara spends most of his time doing evaluation of college players and he particiaptes in the draft but all personnel decisions have been made by the GM and HC. #Giants

If Mara was hoping to inspire confidence in the direction of the Giants, he certainly didn’t seem to do so based on the initial reasons on social media.

John Mara sounds like someone who doesn't intend to make meaningful change with the organization.

All media was allowed one question, no follow-ups.

Steve Tisch not part of the call.

Owners around the league are calling John Mara and saying they wish they could find a coach as good as Joe Judge. https://t.co/ozZiKLGTSB

John Mara saying “we’re going to get it right this time,” means nothing to me.

Enough talk, just get it done.

This quote is astonishing and telling and a reminder both of how far the Giants have fallen and the fact that things can always get worse.👇 https://t.co/j1petNPWkR

I feel like Mara has said this every other year since 2018 https://t.co/0OiS6LYlut

The Giants are a long way from their last Super Bowl victory in 2011. They haven’t won a playoff game in over a decade. They haven’t had a winning season since 2016. And they haven’t won more than six games in a season since then either. The franchise has hit a rock bottom and it’s going to take a lot of effort and smarts to get it back to where it used to be. NFL fans and media members remain very skeptical of John Mara and his family’s ability to get that done.