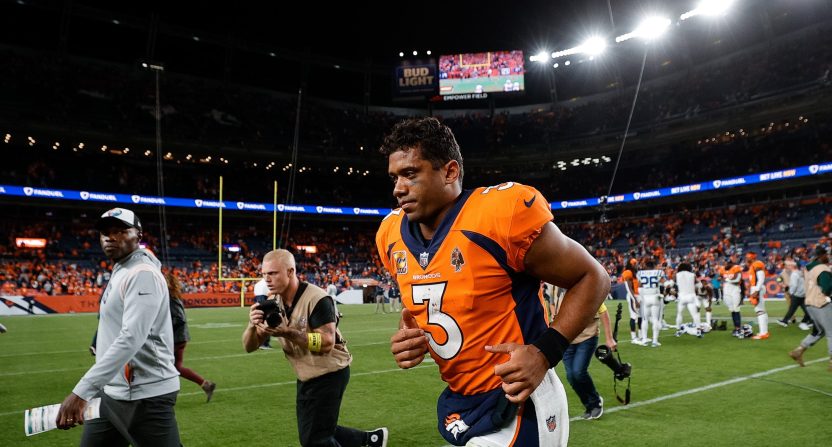 Football fans around the world are trying to wash their eyes out after watching the Denver Broncos lose 12-9 to the Indianapolis Colts on Thursday night.

It was one of the season’s worst games and one of the worst offensive efforts in quite some time. A blind man considered himself lucky that he didn’t have to see the game, an opinion his Twitter followers generally agreed with.

One has to wonder, Do we give the defenses a lot of credit? Was it just poor play by the offenses? Or both?

All eyes were focused on Denver quarterback Russell Wilson who once again played poorly. Wilson ended the game throwing for 274 yards, zero touchdowns and two interceptions.

When Wilson was traded to the Broncos, many thought this was like the team signing Peyton Manning before the 2012 season and that it would be a huge get for Denver. But Wilson has played more like a rookie than a veteran.

He has only thrown for just over 1,200 yards, four touchdowns, and three interceptions. Thursday night’s performance was so embarrassing that Bronco fans even left the stadium before overtime.

Wilson was supposed to be a difference maker in Denver. But his apparent lack of leadership skills and poor play has the Broncos sitting at 2-3 with an uphill battle to climb.

There were rumors that Wilson had diva-like behavior with the Seattle Seahawks which may explain why they were willing to let him go and it may have carried over to Denver. Kyle Brandt of the NFL Network even called Wilson a “poser” and he says that doesn’t work unless you are really, really good like Tom Brady or Patrick Mahomes or a good guy.

The Seahawks meanwhile have a better record (2-2) than the Broncos and have played better at times without Wilson. That includes a Week 1 victory over the Broncos. Whatever the issue in Denver is, if Wilson doesn’t get his act together soon, the Broncos may be seeking another quarterback in 2023.