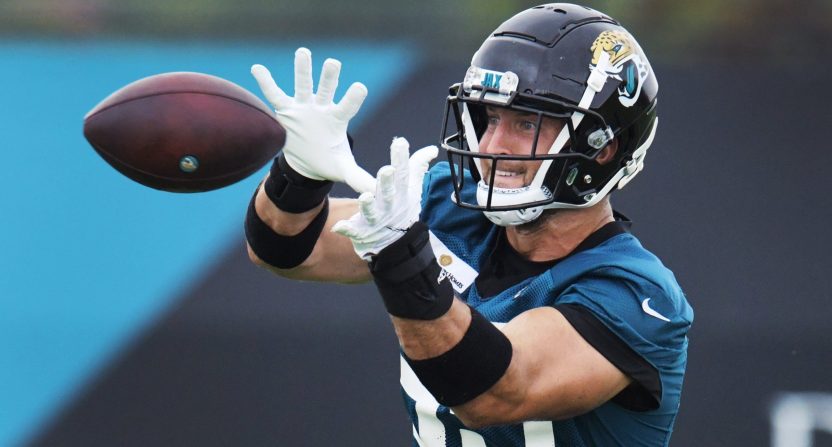 After six years away from football, Heisman Trophy winner Tim Tebow tried to make a comeback this summer when he tried out for the Jacksonville Jaguars as a tight end. Things don’t go as well as hoped and Tebow was released following one preseason game. However, his time there did give him a chance to see how his former Florida coach Urban Meyer was putting his version of the Jaguars together.

Meyer and the Jaguars have not gotten off to a good start and there have been plenty of distractions along the way. However, Tebow seems to think that Meyer and rookie quarterback Trevor Lawrence can get things turned around eventually.

“I just think that they have to stay the course and continue to work to improve,” Tebow said in an interview with AP Pro Football Podcast. “I think there’s a lot of talent there and they just have to continue to try to get better. And every week, I think Trevor’s got so much talent and ability and I think he’s a great young man and I think he’s going to be just fine.”

It’s certainly not going to be easy, especially in the short term. The franchise has lost 17 games in a row and Lawrence has one of the worst passer ratings in the NFL. But if the Jaguars are willing to continue to look long-term towards rebuilding, and Meyer is truly interested in sticking around to see it through, crazier things have happened in the NFL.

As for his brief stint with the Jaguars, Tebow said that he appreciated the chance and enjoyed it.

“It was a lot of fun, a blessing to have the chance to do it and go pursue that and really enjoyed all of it. … enjoying the competition, the grind, the highs, the lows of all of it,” Tebow said.