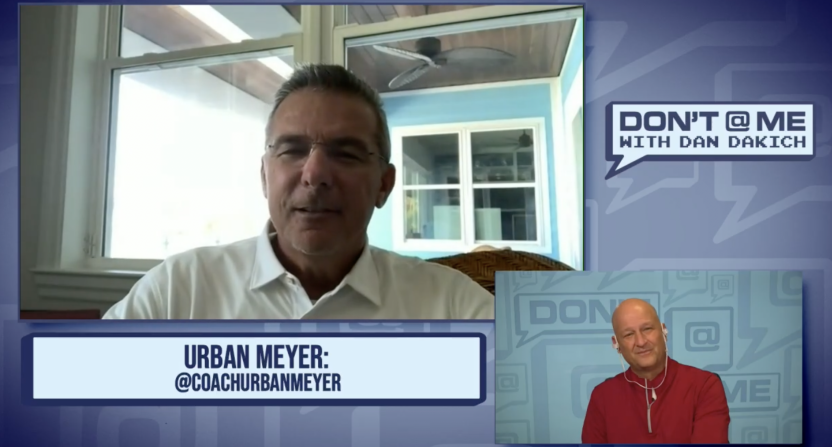 The only thing bigger than the hype Urban Meyer brought with him to the NFL when he took the Jacksonville Jaguars head coaching job was the implosion that happened when it all went wrong. The 57-year-old was fired by the Jaguars just 13 games into his first and final season.

From the preseason rumors of player discontent to the shocking viral video drama to the allegations of calling coaches “losers” and kicking a player, Meyer’s tenure with the Jaguars was as infamous for what happened off the field as it was for the many losses that occurred on it.

For the most part, Meyer has stayed quiet since the firing, but he appeared on OutKick’s Don’t @ Me with Dan Dakich on Monday to talk about the wild playoff weekend that was and also get into some of the reasons why things fell apart in Jacksonville.

While the most noteworthy part of the interview was that Meyer adamantly denies the accusation that he kicked Josh Lambo during practice, Meyer also shared some honest feelings about how the NFL experience differed from college, where he found so much success.

“You know, the amount of reps you get before you go play a game, to me, was shockingly low. For example, we would practice, you maybe get one or two reps at something, next thing you know you’re calling it in the game. In college, you never do that. In college, you’re gonna get at least a dozen opportunities to practice that before you ask a player to go do it in the game. So there are a lot of differences.”

Meyer also added that the lack of recruiting in the pro game means the emphasis on scheme and tinkering with rosters makes a huge difference in how you see the game.

“Used to be in college,  the reality is you spend 75 percent of your time recruiting,” said Meyer. “In professional football, there’s no recruiting. So it’s all scheme and it’s all roster management. You’re getting guys rolling in on your organization on a Tuesday and they’re gonna play for you on a Sunday. So there is some obvious differences to the two games.”

Dakich asked Meyer what it was like to lose so many games when most of his coaching career has been marked by constant winning and championships.

“It was the worst experience I’ve had in my professional lifetime,” said Meyer. “What really got me, I almost don’t want to say people accept it, I mean, you lose a game, and you just keep…I would seriously have self-talk. I went through that whole depression thing too where I’d stare at the ceilings and [think] ‘are we doing everything possible’ because I really believed we had a roster that was good enough to win games. I just don’t think we did a great job.

“It eats away at your soul. I tried to train myself to say ‘okay, it happens in the NFL. At one point, the Jaguars lost 20 in a row. Think about that. 20 games where you’re leaving the field where you lost. And we lost five in a row at one point and I remember I…just couldn’t function. I was trying to rally myself up, I was in charge of the team, obviously, and then we won two out of three, and I really felt like we flipped that thing.

“You know, our defense was playing excellent. At one point our defense was No. 1 in the league. We held Josh Allen to six points. Two field goals. And playing high-level football. Offense, we were really coming, and then quit scoring points. We just really struggled offensively and that’s when we went on another losing streak…I really struggled with that.”

Being able to deal with losing, especially when you’re coming into a job with a franchise like the Jaguars and where they are right now, is just part of what it means to coach in the NFL. Pretty much all of the great NFL coaches have had to deal with losing seasons and struggles before they were able to turn things around. For whatever reason, it just sounds like Meyer’s inability to handle losing on such a level simply wasn’t something he could push through.

Dakich asked Meyer if he was planning to return to Fox or some other media job now that he was out of coaching again, to which Meyer replied “at the right time…I really enjoyed that” but “no decisions have been made.” As far as whether or not he has any desire to coach again, Meyer was much more direct, saying “at this point, no.”

Of course, he’s said that before…

[Don’t @Me With Dan Dakich]