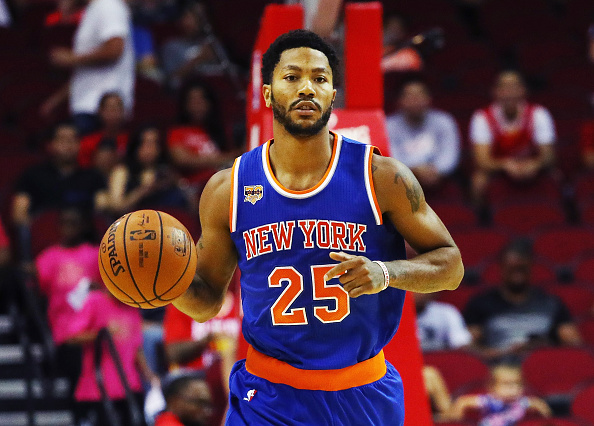 As has been the case for much of the past month, the biggest story in sports Monday involved the Cleveland Cavaliers. Five weeks after general manager David Griffin was dismissed and three days after word leaked that Kyrie Irving hoped to be traded, the Cavs signed former MVP Derrick Rose to a one-year contract, maybe the loudest league-minimum deal of all-time.

We’ll tell you all about D-Rose, Kyrie, LeBron and the rest of the Cavs’ melodrama, plus an odd NFL story and a dose of baseball news—right here in The Cheat Sheet.

A crazy offseason for the Cleveland Cavaliers added another chapter Monday, with the signing of MVP-turned-Knicks-castoff Derrick Rose to a league-minimum contract.

Based on reports out of the Cavaliers’ camp (which seems to have more leaks than the Trump administration), it sounds as if Kyrie Irving has played his last game for the team that drafted him. Irving reportedly demanded a trade because he wants to run his own team instead of serving as LeBron’s sidekick, and the Cavs seem destined to honor his wishes.

Cleveland.com reported Monday that LeBron is “eager to see [Irving] off,” while Stephen A. Smith’s sources—prepare several grains of salt—indicated that James wanted “to beat his ass.” Meanwhile, Damian Lillard, whom Irving reportedly wants to be like, sounded awfully confused as to why anyone would rather be the Blazers’ leading scorer than the No. 2 man on a title-contender.

If Irving is headed out the door, apparently Rose will slot in as the score-first point guard who takes the scoring burden off LeBron, although he will do so much, much less effectively. The 2012 MVP put up solid surface numbers with the Knicks last season—18 points, 3.8 rebounds, 4.4 assists per game on 47.1 percent shooting—though he graded out quite poorly in advanced statistics due to his poor assist rate, awful 3-point shooting and unimpressive defense.

Regardless, it’s hard believe that only five years after winning the NBA’s top honor, Rose will make the league minimum.

After taking a 90% salary cut, Derrick Rose is currently the 55th highest-paid point guard signed for next season. pic.twitter.com/tg8JpVLo8R

But at least one man is very happy to have Rose aboard the Cavs, and he’s the man who counts perhaps more than anyone.

We have a feeling the Cavaliers’ bizarre offseason is not quite over.

– Here’s the weirdest story of the day: The Dallas Cowboys cut receiver Lucky Whitehead after he was charged with shoplifting, then missed a court date. The problem? Whitehead claims he was never arrested and that he wasn’t even in the state where the alleged incident occurred.

Spoke with agent Dave Rich, who represents #Cowboys WR Lucky Whitehead. He tells me his client was NOT in VA the time of alleged incident

– The Boston Red Sox, who have suffered through some truly horrendous performance from their third basemen this season, promoted top prospect Rafael Devers to man the hot corner. Devers becomes the youngest player in the Major Leagues.

– Tampa Bay Rays catcher Wilson Ramos required six staples in his head after being hit with a broken bat. This one looked painful.

Scary scene in Tampa as Wilson Ramos took a bat off his head in the 5th. pic.twitter.com/iCXyslSkCl

– Giancarlo Stanton hit two home runs Monday night to run his July total to 11 and tie him with Aaron Judge for the MLB lead, with 32.

– San Diego Padres outfielder Hunter Renfroe hit one of the most impressive home runs you’ll ever see, christening it with a beautiful bat flip.

HUNTER RENFROE JUST HIT ONE OFF THE ROOF AT PETCO! pic.twitter.com/4TwZ96y3nc

– Mike Tyson is the latest voice of reason to suggest Floyd Mayweather will trounce Conor McGregor when the two face off next month.

– If you want a version of the “F*CK YOU” blazer McGregor wore to a recent promotional event, they’re now for sale.

– The phone call that took down Mississippi football coach Hugh Freeze was reportedly discovered by a diehard Mississippi State fan.

– Cute story here: When Lakers forward Larry Nance Jr. was 10 years old, he wrote letters to a soldier. Nearly a decade and a half later, they reconnected, adorably.

@Larrydn22 many moons ago u were my pen pal during my tour overseas. It always meant alot, still have the letters. Glad your dreams came tru pic.twitter.com/i9hybhLJFw

– Penn State kicker Joey Julius, who has made headlines for his thunderous tackles and for his frank discussion of his eating disorder, has left the Nittany Lions’ program.

For all your Game of Thrones fans out there who spent all day Monday obsessing over the happenings in Westeros, please begin your Tuesday the same way.