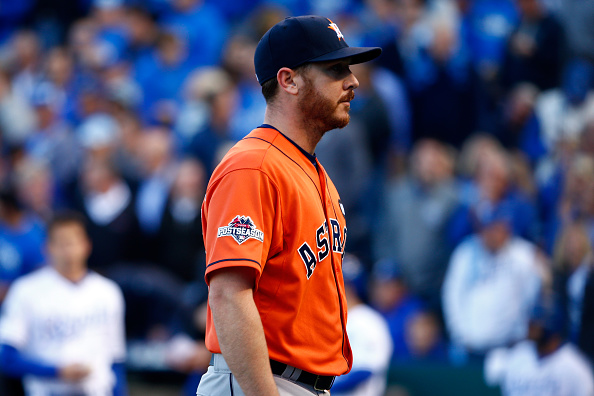 The Los Angeles Dodgers have signed Scott Kazmir to a three-year, $48 million reports Dylan Hernandez of the Los Angeles Times. The contract isn’t as straightforward as it seems, as Jon Heyman of CBS Sports reports the deal has an opt-out after just one season, meaning Kazmir can hit free agency again as soon as next year.

Source: Kazmir's three-year deal with the #Dodgers is for $48 million.

It’s been a pretty slow offseason for the Dodgers thus far. The only real move they’ve made is acquiring prospects as a third team in the Todd Frazier deal with the Chicago White Sox and Cincinnati Reds. They were outbid on retaining Zack Greinke as he spurned them for the Arizona Diamondbacks and they also failed to complete a deal for Aroldis Chapman following a domestic violence incident. With that said, the move puts the Dodgers rotation in solid shape.

Kazmir was out of the league just a few years ago, but he’s rebuilt his value and become one of the better lefty starters pitchers in the game. The 31-year-old had an excellent 2015 campaign split between the Oakland Athletics and the Houston Astros. He was lights out in 18 starts with the A’s, posting a 5-5 record with a 2.38 ERA and an 8.3 K/9 in 18 starts with the club. His Astros tenure was bumpier, as he stumbled to a 2-6 record in 13 starts with a 4.17 ERA and a horrible 5.19 FIP, allowing more hits and striking out less batters. Kazmir made one Postseason start, earning a no-decision in Game 2 of the ALDS.

The opt-out is a bit of a head scratcher, but perhaps the Dodgers could only get the deal done with the option. If Kazmir is awesome, he can chase a bigger contract by opting out, if he struggles or misses time with injury he’s got a guaranteed fall-back option. It’s a win-win for him.

Kazmir joins a Dodgers rotation which features Clayton Kershaw, Brett Anderson, Alex Wood, Hyun-Jin Ryu, Mike Bolsinger, and Brandon McCarthy. As Heyman notes, L.A. could potentially have a rotation with five lefties. Dodgers players were having some fun with the signing on Twitter.

Hey @ClaytonKersh22 the entire rotation is going to use your glove as a sign of solidarity.

.@Dodgers This is blatant handism and I'm filing a hostile workplace grievance

Despite what seems to be a packed rotation, I wouldn’t bet the Dodgers are done addressing their starting depth.