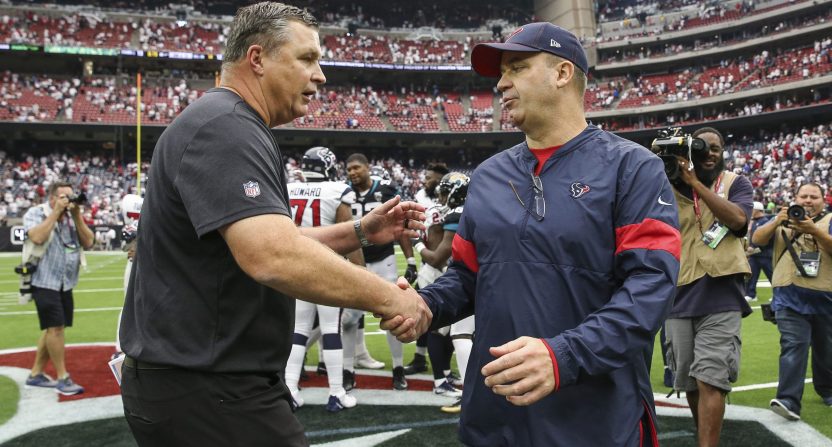 A new college football season often means a new reclamation project for Nick Saban. In the 2021 season, he has two: Bill O’Brien and Doug Marrone.

If you’re a former head football coach, make a beeline to the University of Alabama. Working on Saban’s staff works. Seemingly no matter how bad your record or the circumstances that led you to be booted from your previous job, Tuscaloosa is the place to go to salvage your career.

Athletic directors love to make splashy hires that they can sell to big-money boosters. There is no easier sell than bringing in someone with direct ties to Saban, a seven-time national champion. Call it the Alabama Makeover.

There’s a good chance that the Alabama Makeover will work for O’Brien and Marrone. They don’t have the baggage of Kiffin, Locksley, and Sarkisian. They failed at the NFL level, and there’s a long list of college coaches who don’t succeed in the pros.

O’Brien is an interesting case. Before it all fell apart with the Houston Texans, he enjoyed a strong reputation. A lot of that had to do with being Bill Belichick’s offensive coordinator and working with Tom Brady in New England. He understood the value of being paired with a multi-championship coach and parlayed that into his first head coaching gig.

O’Brien will be forever known as the guy who steered Penn State out of the abyss after the worst sports scandal in college history. Many expected the penalty burdened Nittany Lions to struggle for a long time. O’Brien had winning records in his two seasons and was named the 2012 Big Ten Coach of the Year as a rookie.

Clearly, O’Brien looked like a rising star. So, when the NFL came calling, he bolted Happy Valley for Houston. Can’t blame him. The Texans job was appealing, primarily due to having the No. 1 overall pick of the 2014 draft. He used that selection to take South Carolina defensive end Jadeveon Clowney.

For a while, O’Brien added to his Mr. Fix It image. In his first season, Houston exceeded expectations by going 9-7, and he finished tied for second in Coach of The Year voting. The high point of O’Brien’s six-year reign was consecutive double-digit wins in 2018 and 2019. In what turned out to be his final full season, the Texans, led by young quarterback Deshaun Watson, had a seemingly insurmountable 24-0 first-half lead at Kansas City in the playoffs. Life comes at you fast.

If Houston holds on, maybe O’Brien is still there. Instead, following an 0-4 start in 2020 against a tough schedule (Kansas City, Baltimore, Pittsburgh and Minnesota), he was fired. O’Brien’s questionable personnel decisions as general manager didn’t help. His record with the Texans: 52-48.

Like O’Brien, Marrone started his head coaching career in college before going to the NFL, where he also experienced his own ‘what-if’ moment. Marrone had some success at Syracuse, winning two bowl games in four seasons. He was a surprising hire as Buffalo Bills coach. In his second season, he guided the Bills to a 9-7 record and second-place finish in the AFC East in 2014. Then things got weird. Marrone quit. He opted out of his contract following a change in ownership.

Marrone took over the Jacksonville Jaguars in 2016, and by his second season, they reached the AFC Championship behind a stout defense. They had a 20-10 fourth-quarter lead at New England. Life comes at you fast.

If Jacksonville holds on, maybe Marrone is still there. Instead, following three straight last place finishes in the AFC South, capped by a 1-15 season, he was fired. His record with the Jaguars: 23-43.

At Alabama, O’Brien and Marrone will try to rebuild their reputations. There will be challenges. The Crimson Tide offense has only three returning starters. Five of their departed starters were selected in the first round of the draft. Previous offensive coordinators benefited from having quarterbacks Jalen Hurts, Tua Tagovailoa, and Mac Jones.

O’Brien will have presumed starter Bryce Young. The sophomore appeared in nine games, playing sparingly. He’ll also be throwing to a revamped receiving group. But leading returnee is John Metchie III looks to be the next star wideout.

Marrone might have a better chance at quick success. Alabama had two offensive linemen named to the preseason All-SEC team: Evan Neal and Emil Ekiyor Jr. Plus, the Crimson Tide will add top incoming recruits twins Tommy and James Brockermeyer.

With Alabama in the championship hunt annually, O’Brien and Marrone will get plenty of exposure. Expect O’Brien, 51, to be a college head coach again within the next few years. Marrone, 57, might have a tougher path since he’s older and not a coordinator.

Both are looking for redemption, and Alabama is the perfect spot to prove themselves.