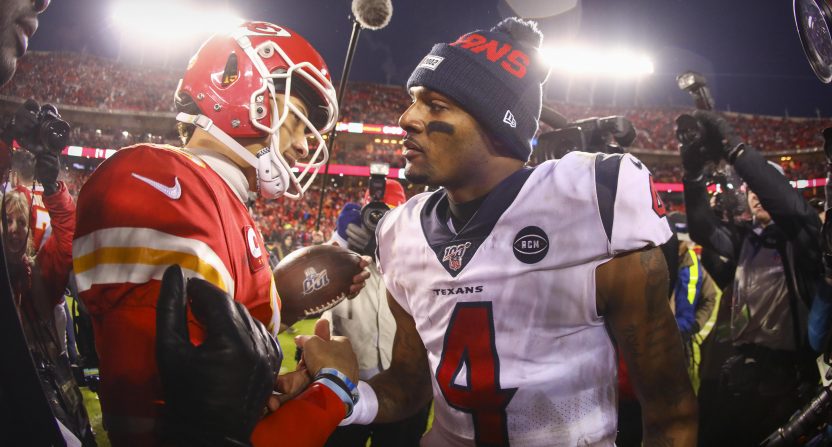 The NFL released its 2020 season schedule on Thursday night, and the Week 1 betting lines immediately followed from various outlets.

It’s important to note that we don’t know if there will be a 2020 NFL season for sure (though the league seems very optimistic), due to the COVID-19 pandemic. And if there *is* a season, there’s a very good chance it involves empty stadiums.

So, that’s worth keeping in mind with the Week 1 betting lines, especially for teams known to have rowdy home-field environments, such as the New Orleans Saints (who host Tom Brady in his Tampa Bay Buccaneers debut) and Denver Broncos (who host the Tennessee Titans on Monday Night Football). It’s also worth keeping in mind that a lot can change between now and September, in terms of player transactions, injuries, etc.

Patrick Mahomes against Deshaun Watson is fun (both selected in the 2017 NFL Draft), but the Chiefs are the defending champions and Super Bowl LV favorites (according to Bovada), while the Texans have gotten worse on paper this offseason thanks to a few puzzling moves by Bill O’Brien (such as trading superstar wide receiver DeAndre Hopkins).

The NFL surely liked the Mahomes-Watson appeal, but oddsmakers think it may not be a close game. And that was the case in January when the Chiefs pummeled the Texans — after Houston had a 24-0 lead — in the AFC divisional round, 51-31.

We don’t know who will be the New England starting quarterback to begin the post-Brady era, but 2019 fourth-round pick Jarrett Stidham appears to be the favorite (and we obviously don’t know how good he’ll be).

The Dolphins went 5-11 last season, which was actually impressive considering how bad their roster was on paper. And Miami appears to be one of the most improved teams this offseason.

Bill Belichick and the Patriots get some reputation points, and their defense was the top-ranked unit according to most metrics last season, but it’s hard to get a good read on them at the moment. This line could definitely see movement in either direction in the coming months.

The Browns seem very much improved, but they were crowned offseason champions last year before going 6-10, so we’ll have to wait and see if that translates to the playing field this time around.

Lamar Jackson enters his third season as the defending NFL MVP, and the Ravens should be very hungry to make a championship run after their 14-2 season in 2019 resulted in a shocking divisional-round exit.

The Bills were one of the NFL’s biggest surprises in 2019, and have added a No. 1 wide receiver for Josh Allen to throw to, in Stefon Diggs.

The Jets went 7-9 last season, but 7-6 with Sam Darnold at quarterback.

It seems cruel to have the Raiders as underdogs in their first game as part of the gambling mecca that is Las Vegas.

It’s also the Panthers debut for head coach Matt Rhule and quarterback Teddy Bridgewater. Will Rhule’s success as a college coach at Baylor translate to the NFL? Is Bridgewater actually a legitimate starting quarterback, or did he just put together a heater in a QB-friendly New Orleans system? These are questions nobody can answer yet.

Finally, a road favorite, all thanks to Russell Wilson.

The Falcons already had Matt Ryan, Julio Jones, and Calvin Ridley on offense, before adding running back Todd Gurley II and tight end Hayden Hurst this offseason. Atlanta also went 6-2 to finish the 2019 season, including road victories over the Saints and 49ers. There’s a lot of upside and intrigue with this Falcons squad, but oddsmakers are siding with an elite quarterback opponent to start the season.

A pretty substantial betting favorite, which may say more about the Redskins than Eagles. Washington is currently tied for the worst Super Bowl odds, according to Bovada.

Nick Foles will likely be Chicago’s starting quarterback, but the organization continues to make it seem like a camp battle between Foles and Mitch Trubisky. But if it’s Foles, which version of Foles are the Bears getting? A version closer to the Super Bowl LII MVP, or a version closer to the guy that couldn’t outpeform a sixth-round rookie last season in Jacksonville? The defense should remain an excellent unit (with a healthy Akiem Hicks and the addition of edge rusher Robert Quinn), but oddsmakers are understandably skeptical of the Chicago offense entering the season.

The Lions went 3-12-1 last season, but that’s misleading- they were 3-4-1 with Matthew Stafford, who missed eight games due to injury. Stafford had a 106.0 passer rating — which would’ve ranked sixth in the NFL if qualified — in his eight starts.

Basically the same thing as the Eagles-Redskins game. The Colts look like a solid squad, with a new quarterback in Philip Rivers. And the Jaguars — in rebuild/tank mode — are tied with the Redskins for the worst Super Bowl odds.

The Packers won three more games (13 vs 10) than the Vikings in 2019 to take the NFC crown, and beat the Vikings both times in the regular season.

But many evaluators will tell you that the Vikings were as good or better in reality (and the Saints would probably tell you the same, after the Vikings were victorious in New Orleans in the NFC divisional round). The draft may have also impacted the current perception of these teams; the Vikings’ draft was highly praised, while the Packers stunningly drafted a quarterback and running back with their first two picks, despite already having Aaron Rodgers and Aaron Jones.

This is also one of those games that could move closer to a pick ’em if there aren’t fans in attendance.

The Bengals went 2-14 last season, and will likely be starting a rookie quarterback. But that rookie is Joe Burrow, and he seems like a pretty safe bet to be decent enough quickly.

The Chargers were bad themselves in 2019, going 5-11. And they also drafted a quarterback early with the selection of Justin Herbert (taken with the No. 6 overall pick), but it’s very likely that Tyrod Taylor starts this game.

The 49ers won the NFC championship last season, and are the favorites to do so again this season.

Will the Cardinals make the jump in Kyler Murray’s second season? Providing Murray with an elite receiving weapon in DeAndre Hopkins certainly helps, but oddsmakers will be cautious early on for a team that went 5-10-1 last season.

How much does 43-year-old Tom Brady have left, and how will he look playing for a team other than the Patriots for once (the same goes for Rob Gronkowski)? How much does 41-year-old Drew Brees have left?

Oddsmakers are buying on both legendary quarterbacks- the Bucs and Saints are tied for the fourth-best Super Bowl odds.

The first NFL game scheduled at SoFi Stadium (Inglewood, CA) features a home underdog. The Rams were left out of the postseason in 2019 with a 9-7 record, after going 13-3 and reaching the Super Bowl in 2018. Can Sean McVay get the offense to look more like the 2018 version, or does he have a quarterback problem — Jared Goff — that will hold them back?

Dak Prescott is currently unhappy about not having a new long-term contract with the Cowboys, but he at least must be thrilled about the weapons the organization has supplied him. The Cowboys drafted wide receiver CeeDee Lamb with the 17th overall pick in the 2020 draft, while already having Amari Cooper and Michael Gallup at wideout. Just more firepower for an offense that led the NFL in yards per play (6.5) in 2019.

Will quarterback Daniel Jones take a sizable step forward in year two? We need to see it first before believing in the Giants.

The Steelers went 8-8 last season, despite Ben Roethlisberger missing 14 games due to injury. The 38-year-old quarterback claims he’s “throwing without pain for the first time in years.”

Drew Lock went 4-1 in his rookie season for Denver, and the Broncos have surrounded him with weapons this offseason. Mile High is an extremely difficult road environment (if there are fans in the stadium).

Will Ryan Tannehill — fresh off a $118 million contract — continue to look anything like the guy who led the NFL in passer rating (117.5) for the Titans in 2019? And running back Derrick Henry’s remarkable 2019 season comes with some concern entering 2020, due to the massive workload (an NFL-high 303 carries in the regular season, followed by 83 carries in the postseason).