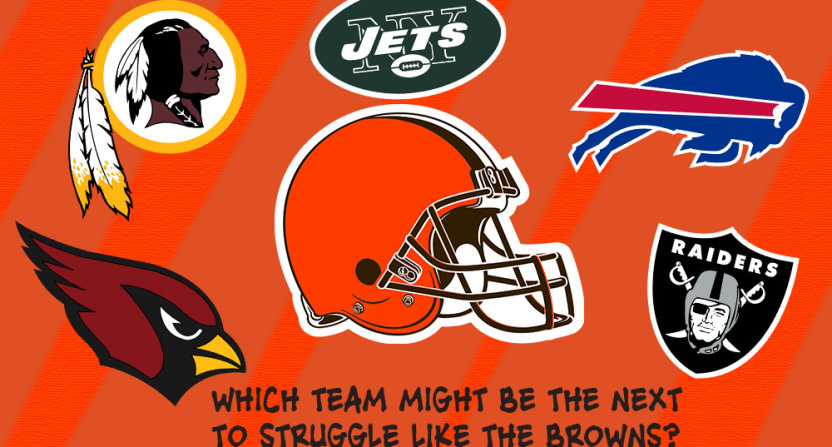 For years, the Cleveland Browns have been the joke of the NFL. At the start of every year, where fans of every team get the optimism that this year is their year, the Browns were the exception to the rule. The last time the Browns made the postseason was in a 2007 season where they finished 10-6. After that came a bunch of four- and five-win seasons, other than a 7-9 in 2014 that still put them last in the AFC North. Then came a 3-13 season, and then 1-15 and 0-16 in 2016 and 2017.

Those were some depressing times in Cleveland, even by Browns standards. This year, the team has improved. They have who they believe is their franchise quarterback in Baker Mayfield. And at 6-7-1, the Browns still have an outside shot at the playoffs. One could make the argument that if not for some dubious calls by officials, the Browns could be leading the North and be at a 10-win season.

The Browns aren’t there yet, and no one is suggesting they have a Super Bowl-contending team, but they have improved to a point where those really bad seasons have become a thing of the past. As one team goes up, another has to take its place. Here are five teams who, for one reason or another, could be that team who spends a long time being terrible and who dwells at the bottom of the standings for the foreseeable future.

If there is any team who is most likely to suffer years and years of continued failure, it’s this dumpster fire of a team. Jon Gruden looks like he has no clue what he’s doing and the game has passed him by, and that shows after trading Khalil Mack and Amari Cooper and signing perennial pick machine Nathan Peterman.

At least the Raiders get to go to a brand new stadium in Las Vegas. Although, in between that time, they will be traveling like nomads to who knows where because the city of Oakland doesn’t want them anymore. Yeah, this team is a mess.

Despite the late success they have had, the Cardinals have been losers for years. Despite being a team before the NFL was formed, the Cardinals only won two championships in their history. The last time they won a title, we were coming off World War II and the team has moved twice since. Yes, the Cardinals had a great run over the past 10 years but they seem to have fallen back into their rut they once had for decades.

This team needs a lot of work. The Cardinals drafted Josh Rosen and he’s still trying to make his way as a rookie, but he still hasn’t had a 300-yard passing game and likely won’t have future Hall of Famer Larry Fitzgerald for much longer. Include David Johnson, who’s a talented running back but isn’t at his 2016 All-Pro level (and was one of our top fantasy disappointments this year), and suddenly, this team is back into rebuild mode and a second Super Bowl appearance feels like an eternity away.

If it wasn’t for the Browns, we may have been looking at the Jets being terrible all this time and madethem the joke of the league. That comparison is still there, and whether it’s a combination of their own ineptitude or having the New England Patriots in their division, they’ve failed to make the playoffs since 2010.

Will it get as bad as the Browns? Who knows. One season, the Jets can go 4-12, the next go 10-6 and then go back down to 5-11. This season, they are at 4-10 and their 3-3 start seems like forever ago. I like Sam Darnold, I think there could be something there and while I don’t want to jinx them, the Jets may have some optimism once he really gets going. My fear is that no matter what, Woody Johnson still owns that team. He may be Ambassador to the UK now and Christopher runs the show, but it doesn’t matter. As long as that family owns the Jets, they aren’t winning anything.

I don’t usually like to give Dan Snyder credit, but I really thought he and the Redskins had it right this time. After Kirk Cousins’ emergence, things could have really gone off the rails with their insistence of not giving him a longer term deal. But after trading Cousins to the Vikings and trading for Alex Smith, a quarterback who I feel never got the praise he deserved in San Francisco and Kansas City, I thought the Redskins were set up for a potential playoff run.

And then Alex Smith suffered a broken leg. It’s nothing on the team or on Smith, that injury was just horrible luck that I wouldn’t wish upon anyone. But that injury is going to have a huge impact on the team’s future. With the ensuing surgery and recovery he is facing, there are so many unknowns with that right now. If Smith is able to make a full recovery, as everyone hopes will happen, the Redskins may be fine. If Smith isn’t, and this broken leg unfortunately shortens his career, it’s back to the drawing board in Washington.

The Buffalo Bills are strange. Just when you thought they would be good, they do something that makes you scratch your head and wonder if anyone in charge knows anything about football. Last year, the bills were solidly keeping themselves above .500 and after a bad loss to the Saints, Tyrod Taylor was benched for the aforementioned Nathan Peterman. Taylor isn’t the best quarterback out there, but clearly Sean McDermott panicked when he started Peterman after one bad game by Taylor. Peterman did way worse and Taylor got his job back, somehow leading the Bills to their first playoff berth since 1999.

After making the playoffs, Taylor was traded to the Browns, and the Bills drafted Josh Allen. Taylor could have been Allen’s backup instead of being Baker Mayfield’s backup in Cleveland but the Bills made Peterman backup and when Derek Anderson got injured after Allen got injured, Peterman came in to crap the bed so the Bills got Matt Barkley. Eventually, the Bills finally got rid of Peterman, who found a job in Oakland, and Allen is healthy and doing okay as a running quarterback. But my worry isn’t so much Josh Allen, it’s whether or not Sean McDermott panicks and screws things up.

The NFL may have parity and is set up in a way where teams can improve and be successful, but there’s a reason why certain teams remain near the top and why other teams remain near the bottom. Yes, teams like the Patriots or the Steelers are successful because they have a franchise quarterback, and that definitely helps. But, and in no way am I saying this is easy, any team can find themselves a franchise quarterback. The Lions (who could have been on this list) have had Matthew Stafford for 10 years and haven’t come close to a title.

What those five teams have in common is that they all have had people in charge, whether at the ownership, GM and/or coaching level, who clearly weren’t up to the task of improving their team to having consistent success. Sure, some teams fire people too quickly, but leaving people in their job with no discernible sign of future improvement can be just as bad. Players get replaced all the time but until you fix your front office, it doesn’t really matter what players you have, it’s going to be difficult to succeed.

5 thoughts on “With the Browns improving, who might be the NFL’s new doormat?”