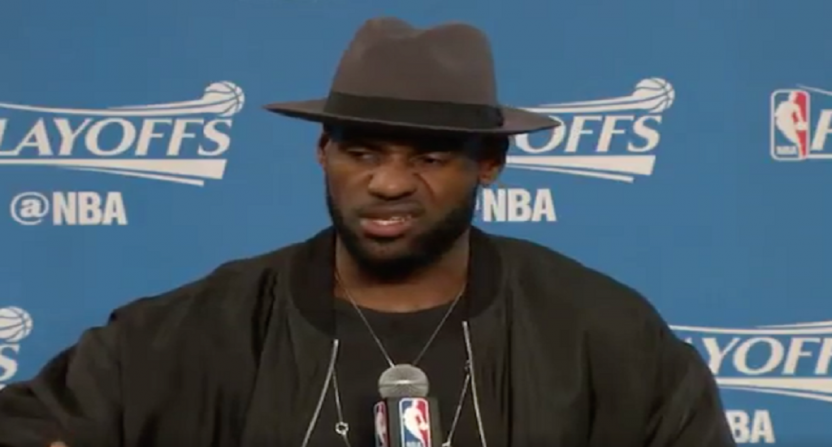 Sometimes it really just is not fair how good some of the world’s top athletes are at their profession. LeBron James is continuing his tradition of taking over the NBA Playoffs. The Yankees have another young stud in 25-year-old outfielder Aaron Judge. And now Tony Romo is going to give it his best shot at professional golf.

Thanks guys for making us normal humans look like a bunch of underachievers. Enough of that, let’s get to today’s Cheat Sheet.

LeBron and the Cavs played basketball, while the Raptors came to town to play pretend

After one quarter, the Cleveland Cavaliers were leading the Toronto Raptors by 12 points in Game 2 of the Eastern Conference semifinals. Cleveland never looked back.

Shockingly, LeBron James led the Cavaliers in scoring for the night with 39 points. His total for the night vaulted him past Hall of Famer Kareem Abdul-Jabbar on the NBA’s all-time playoff scoring list.

Uncle Drew to King James for the filthy slam! pic.twitter.com/yIIO05PR2j

Toying would be a nice way to describe what LeBron did to the Raptors on Wednesday night.

But the Cavs not going to the finals lmao pic.twitter.com/t7AzbF52uK

Cleveland went on to defeat Toronto 125-103 and take an early 2-0 lead in the series. You can take it to the bank that Stephen A. Smith will declare this series to already be finished tomorrow on that show ESPN deems to be so sacred.

After the game, James told the media that he is not a psychic and does not know how the outcomes of the next two games will go. We know LeBron, but that still does not mean you are human.

.@KingJames admits he’s “not a psychic.” He doesn’t know what will happen in Toronto, but he does know what he and the @cavs CAN do. pic.twitter.com/yolyGewPBT

Spurs happy to tie their series with the Rockets, but Tony Parker may be lost for the rest of the playoffs

Thanks to Kawhi Leonard’s team leading 34 points, the San Antonio Spurs defeated the Houston Rockets on Wednesday by a final score of 121-96. With the win, the Spurs and Rockets are now tied at one game apiece in their Western Conference semifinal.

Kawhi Leonard ignites the @spurs with 20 first half points! pic.twitter.com/aPsKPrJJ63

San Antonio guard Patty Mills showed off some of his skills on Wednesday too and made Houston guard Patrick Beverley look downright silly.

Unfortunately, the win came at a cost for San Antonio. With the team up 14 points over the Rockets midway through the fourth quarter, Spurs guard Tony Parker landed awkwardly on his right knee after a shot attempt.

Parker had to be carried off the court by his teammates and did not return to the game.

The way Tony Parker looks at his knee here is scary. Almost like “Damn. This might be it.” #NBAPlayoffs

“It’s tough to lose a player like TP. It didn’t look good.”

Spurs fans seem to be taking the news pretty well.

– New York Yankees outfielder Aaron Judge hit another home run on Wednesday during the team’s 8-6 win over the Toronto Blue Jays, his 13th in 26 games. No confirmation yet on the rumor that there were 75 requests for him to submit a pee sample following the game.

When @TheJudge44 is in the batter’s box … you’ve got 99 problems. pic.twitter.com/8f7jGeqCMP

– For those who have never experienced the rush of crowdsurfing, you have now been outdone by the World Series trophy.

– The Pittsburgh Penguins got a 3-2 win over the Washington Capitals to take a 3-1 lead in the Eastern Conference semifinals. Surprisingly, ESPN still has enough employees to post a recap of the game on their website.

THREE DOWN, ONE TO GO. pic.twitter.com/pbMrDqLoF6

– Want to see something cool while simultaneously feeling bad about yourself at the same time? Well then take a few seconds to watch this high school baseball player have absolutely no trouble performing his duties as a catcher… with one hand.

Big shout out to cornersville’s middle school catcher. With the use of one arm, this guy is getting it done. What a stud. pic.twitter.com/4rhPycFGyY

– A trailer for The Dark Tower (a film based on a series of books written by some Stephen King guy) has been released. It features the sea lion from Finding Dory and the drug dealer from Dallas Buyers Club shooting some guns.

– During halftime of the Spurs/Rockets game, WWE wrestler Mark Henry straight up assaulted the Rockets’ mascot with a steel chair out of nowhere. Obviously this was a completely real sequence and nothing was pre-planned.

Mark Henry taking out the mascots ? (via @BleacherReport) pic.twitter.com/xY7liSSHT8

– Since retiring from the NFL, Tony Romo is participating in almost every sport except for football. On Wednesday, it was announced that the former quarterback would be golfing in an upcoming U.S. Open qualifier in Dallas, Texas.

– Former NBA player Stephon Marbury is reportedly interested in collaborating with LaVar Ball and his Big Baller Brand. Sorry Stephon, but getting your shoe logo tattooed on your head was a much smarter decision.

– Playoff hockey in the NHL basically means that every game goes to overtime. This was proved true on Wednesday night when the Anaheim Ducks (should still be the Mighty Ducks, but whatever) edged the Edmonton Oilers 4-3 in overtime and tied their playoff series at two games apiece.

– Legendary Los Angeles Dodgers broadcaster Vin Scully was immortalized on Wednesday as the team inducted him into their Ring of Honor. After the ceremony the Dodgers wrapped him up in moth balls and put him back in storage.

– Paramore has released a second song from their upcoming album titled “Told You So”. Believe it or not, this will be the band’s fifth studio album.

– Beginning in May of 2018, people will no longer be able to their favorite episodes of Curb Your Enthusiasm or any other HBO shows on Amazon Prime. Larry David is outraged!

Slash has nothing on this Grandpa’s shredding ability.