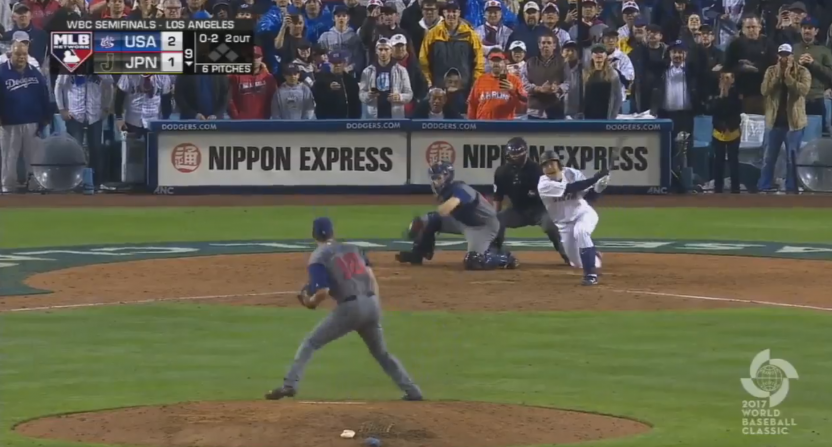 It’s not often that baseball is the biggest story on a night in March, but on Tuesday nothing was bigger than the World Baseball Classic.

On a rainy night in Los Angeles, Team USA beat Japan 2-1 to advance to the WBC finals for the first time ever. We’ll tell you how that happened and also fill you in on LeBron James’ message for LaVar Ball and the night’s big NBA fight.

In the three previous World Baseball Classics that preceded the current one, the United States had finished no better than fourth place. For the country that invented baseball and still boasts a comfortable majority of players in the Major Leagues, the American team’s performance in this event has kind of embarrassing.

But on Tuesday night, Team USA redeemed its past struggles, beating Japan 2-1 to advance to the WBC final. No matter what happens Wednesday against Puerto Rico, the U.S. will finish the tournament with its best ever result.

The win over Japan wasn’t easy. After brilliant performances from starting pitchers Tanner Roark and Tomoyuki Sugano, the game was tied 1-1 in the top of the eighth inning. That was when Brandon Crawford singled, Ian Kinsler doubled and Adam Jones—who seems to be the hero every night for Team USA—grounded to third base to score the game-winning run.

If not for the rainy conditions at Dodgers Stadium, the go-ahead RBI might very well have been an out at the plate.

.@SimplyAJ10 has been in the middle of the action for Team USA all #WBC2017 long. pic.twitter.com/RvFQelWs8x

Mark Melancon and Pat Neshek combined for a scoreless eighth inning, then Luke Gregerson came on for the save in the ninth. Here’s how the game ended:

Team USA’s pitching has come up big all tournament long.

Tonight was no different. #WBC2017 pic.twitter.com/9HY6YfgPaV

And so the U.S. improves to 5-2 in this tournament and moves on to what should be an awfully fun final. Puerto Rico—led by Francisco Lindor, Carlos Correa, Javy Baez and Yadier Molina—is undefeated in the WBC and will certainly not roll over for Team USA.

As for the American players, they’re pretty pumped.

Do or die tomorrow ?? vs ?? gold medal on the line #UnitedWeGrind #WBC2017 #ForGlory

The final will be played Wednesday at 9 p.m. ET at Dodger Stadium.

– The Bulls and Toronto Raptors came to blows Tuesday, with Robin Lopez and Serge Ibaka throwing punches and earning ejections.

– The Clippers beat the Lakers 133-109. It was such a blowout that Chris Paul invited his son to sit on the bench with him.

Chris Paul chilling with his son during a blowout lol pic.twitter.com/ScMCCSCil5

– In a way, LaVar Ball is speaking truth to power. Could some good come out of his loud-mouthed bluster?

– LeBron James doesn’t think so. In fact, after LaVar said his kids would be better at basketball than LeBron’s kids, The King not-so-politely asked him to please shut up.

LeBron was not pleased with LaVar Ball. pic.twitter.com/hrsTDDl9kd

– Here’s why the NFL should adopt college-style overtime rules.

– On the heels of a World Baseball Classic run, Israel is looking to build its first regulation baseball field.

– Barry Bonds is back in the Bay, as an “ambassador” for the San Francisco Giants’ organization.

– This Sidney Crosby goal might just be the best of the year.

– Gary Bettman is talking as if NHL players won’t be allowed to participate in the 2018 Winter Olympics.

– Jim Harbaugh takes his peanut butter and jelly with potato chips on it. He also works out in khaki pants. Yeah, he’s weird.

– Speaking of peanut butter and jelly, it turns out every NBA team is totally obsessed with it.

– Rob Gronkowski was at WWE Smackdown, and he enjoyed himself about as much as you’d expect him to.

– A Broadway production company is making a movie based on the Monopoly board game, which should be interesting, if nothing else.