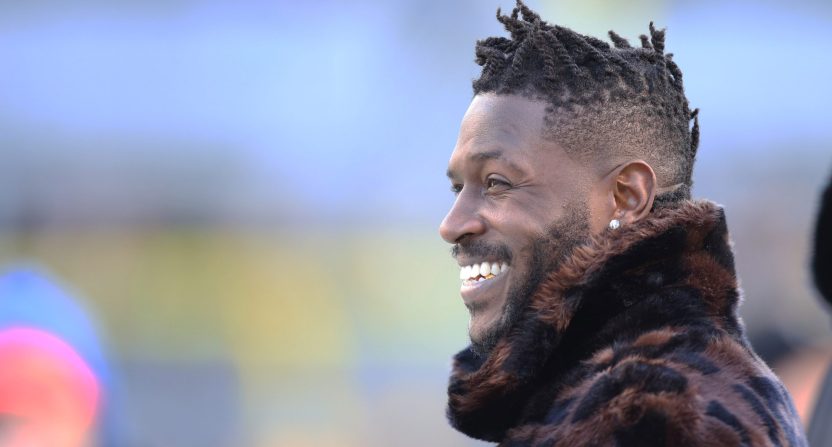 After a video of former NFL receiver Antonio Brown exposing his buttocks and genitals to a woman in a hotel pool in Dubai went viral, Brown is still trying to tweet through it. That story went around the world Saturday, and Brown quickly responded with an attempted defense. He then offered an even wilder tweet Sunday:

Every chance they get to sway the heat off themselves they use me. In the video you can clearly see she runs off with my swim trunks. If roles were reversed the headlines would read “AB having a wild night with nude female”.Yet when it’s me it automatically becomes a hate crime

Video of the incident in question can be seen here (via The New York Post):

That second tweet Sunday drew quite the reaction from the NFL world:

The best thing to ever happen to the Bills was Antonio Brown saying no to them.

This is far from the first controversy Brown (seen above on the Pittsburgh Steelers‘ sidelines in 2018) has been involved with. While he often lit up the league on the field during his 2010-18 stint with the Steelers, his off-the-field behavior drew attention even then. That included when he recorded a speech from head coach Mike Tomlin and put it on Facebook Live (a company he reportedly had a six-figure sponsorship deal with). Brown received a historic contract in 2017, but lobbied to be traded ahead of the 2019 season, and was eventually sent to the (then-Oakland) Raiders. And things only got odder around him from there.

In 2019, Brown’s behavior throughout training camp drew attention. He initially refused to play over the NFL not approving the helmet he wanted to use, but then it came out that he’d suffered frostbite on his feet from cryotherapy, and then he got into a screaming match with GM Mike Mayock and threatened to punch him. Much of that was captured on Hard Knocks. Brown was then cut by the Raiders and signed with the New England Patriots, then faced a lawsuit over alleged sexual assault of a former trainer, and then was released after accusations he sent threatening text messages. He then went on a Twitter rant against specific media members and said he was retiring from the NFL, then took that back. Then, in early 2020, he faced criminal charges for burglary with battery, and that summer saw him suspended for the first eight games of the 2020 NFL season for violations of the personal conduct policy (although he wasn’t currently with a team at that point).

Despite all that, the Tampa Bay Buccaneers still signed Brown in October 2020. And that seemingly worked out okay for both sides for a while; Brown played in eight regular-season games, starting four, and posted 45 catches for 483 yards and four touchdowns. He then caught a touchdown pass in their Super Bowl LV victory. But the 2021 season was rockier; Brown was put on the reserve/COVID-19 list in September, then wound up with a three-game suspension in December for misrepresenting his vaccination status, with that coming around reports of him trying to obtain a fake vaccination card.

Brown then took his jersey, pads, and shirt off during a Jan. 2, 2022 game and ran into the locker room. The Bucs parted ways with him soon after that. Brown claimed he was pressured to play through injury, which the team disputed. Since then, the 34-year-old Brown seemingly hasn’t drawn a ton of NFL interest, and he said himself not to expect him to play in that league this year. He’s tried to change careers and become a hip-hop artist (which led to some notable public drama with   and he’s claimed he doesn’t have mental health issues, but many have still expressed concerns about him given his seemingly-erratic behavior. And that Dubai video, and his tweets afterwards, will only add to that.