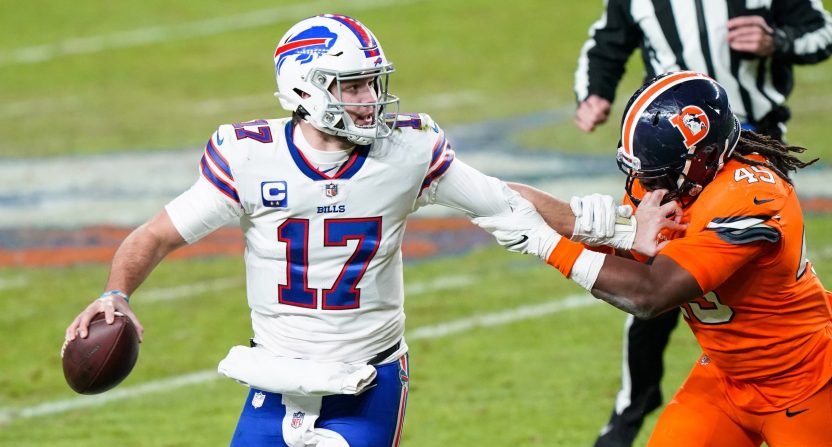 When people draft their players for the upcoming fantasy football season, most of the focus is on the top stars and the expectation of the huge chunk of points they can score throughout the week. Fantasy sports is an imperfect science, and the difference between a champion and someone who cannot make the playoffs is the person who can draft an overlooked talent in the later rounds, or who can pickup that free agent on the waiver wire.

It’s these players who were overlooked at the start of the season who are recognized in the All-Star Team. Anyone can draft Patrick Mahomes or Davante Adams and look like a genius, but they were already ranked high and were expected to rack up the points. It takes a good eye (or maybe a bit of luck) to draft Justin Jefferson or be quick to add Mike Davis after Christian McCaffrey was injured. So while you probably were sitting pretty if you had Alvin Kamara, especially in Week 16, you probably had a great season if you had any of these players.

(Preseason and in-season rankings are based on ESPN’s PPR ranking and scoring system. Ranking positions are based on total points during the 2020 season.)

Granted, he got a chance because the team doctor punctured Tyrod Taylor’s lung, but Justin Herbert made the most of his opportunity. Taking the starting job in Week 2, Herbert has made a claim for the starting job next season, as he scored multiple touchdowns in 10 of the 14 games he started.

The most impressive of the three might be Josh Allen. Herbert was completely unexpected, Aaron Rodgers has always had the skill and he proved fantasy owners wrong that he isn’t yet done. But Josh Allen was an established starter who many of us expected an average season. He wouldn’t have been bad but he wouldn’t have been great either. Then Allen went on a tear and looked like the kind of franchise quarterback that can consistently get points. And given he had a couple big weeks in playoff time, Allen was a pleasant surprise.

You’d think a Jaguars team who has already clinched the first pick in the draft wouldn’t be known for having a top running back, but James Robinson sure bucked that trend. The Jaguars didn’t really have a running back to start the season and it was more a running back by committee. Naturally, given the choice of picking up the potential starter, I chose Chris Thompson instead of Robinson, and that’s a reason why I didn’t make the playoffs this year. Robinson stepped up, averaging double-digit points in every game. An ankle injury kept him out of championship weekend, but he sure did the work to get a team to the title game.

If there’s a late-season fantasy MVP, it might be David Montgomery. After the Bears’ Week 11 bye, Montgomery scored more than 20 points every week. He sure showed up when it got to crunch time.

Finding gems among the receivers was a bit more difficult, but it could be done. The player with the biggest jump was Justin Jefferson, who just slightly outperformed teammate Adam Thielen (even though Thielen played in one fewer game). Diggs and Metcalf are receivers who we knew were good, but this is probably the last year you’re going to see them in the middle of the pack in the rankings. If you’re going to want to draft them, you’ll probably need to take them a lot earlier than usual now.

It can be kind of easy to find tight end talent in the later rounds, but except in special circumstances, there’s a ceiling to all of them. After the top couple, there isn’t much separation among the next 15 or so tight ends. That being said, people like Robert Tonyan and Logan Thomas in particular impressed and should be drafted higher next season.

Honorable mention – Travis Kelce – Kansas City Chiefs; Darren Waller – Las Vegas Raiders (Yeah they were highly ranked but these two put up wide receiver numbers and outperformed every other tight end by an outrageous margin. For that, I’m making an exception and giving them some props for going above and beyond even with high expectations.)

Not much to say about these positions; it’s more to make a point that if you’re drafting a defense and a kicker before your final two picks, you’re kind of wasting the picks. Yeah, the Steelers defense is known for making turnovers and Justin Tucker can kick long field goals, but they don’t outscore everybody in fantasy so leave them to someone else to waste an early pick on. Really, it’s all about having the team or kicker who’s having a great game each week.